I am, somewhat to my own surprise, a grumpy old man.

I’m thirty-four, meaning I seem to have caught my case of the grumps fairly young. Id like to tell you that this is a recent development, that as I slowly edge to the point in my life where I will soon become closer to forty than to thirty a certain change has come over me, transforming me from a once jovial youth to a curmudgeonly old miser. I’d like to tell you that but unfortunately, the label has been following me around since my late teens.

“You’re such a grumpy old man!” my friends would tease.

“Don’t mind him, he’s just an old grump.” they might say.

And I would laugh along at the joke. At what I had always assumed was a joke. I knew I wasn’t a grouch. I’d always thought of myself as a pretty easygoing kind of guy. I didn’t get cross easily. Never shouted. I’ve only ever thrown one proper punch at an actual person in my life, with fairly unimpressive results. Ok, perhaps I tended to express myself in periodic bursts of scathing sarcasm and one-liners, but I was after all a teenager, and one suffering from pretty severe social anxiety at that (although it would take me another fifteen years to figure that out).

I did suffer from depression. Dark moods that would follow me daily and sometimes swallow me whole for months at a time. However, as I’m sure is the case with many people who suffer chronic anxiety and depression I had become extremely adept at hiding it. I may not have fooled one hundred percent of people one hundred percent of the time, but I’m pretty sure that most people had no idea of the extent of my mental health problems.

So I have certainly never seen myself as a grumpy person. But as I got older the reputation persisted. I eventually got married, and then my wife would make the same jokes. Slowly I began to realise that I really was coming across as a grumpy old man. But I still didn’t believe I was one.

Then I hit my thirties. Now, I know that for a lot of people hitting thirty can be a difficult experience. Youth is starting to slip away and middle age approaches, bringing with it the first whiff of our own mortality. But for me, the main feeling was one of relief.

Somehow at post thirty different things are expected of you. The wild nights of binge drinking and clubs start to fade away and suddenly brunch and dinner parties become regular features in your life. I’ve always been partial to a slice of cake and a nice conversation and I don’t care who knows it! For me, the transition of my social life from one that revolved around the consumption of alcohol to the consumption of food was nothing but a delight. I was no longer expected to be cool, quite the opposite in fact. In short, I felt more comfortable at thirty than I had at any preceding point in my life.

But with this newfound self-acceptance came something less welcome. I started to see the grump in myself. I started to realise that although the sarcasm had tailed off with age, now when something annoyed me I complained. And I don’t mean I complained to the person responsible for the annoyance, oh no, I am far too British for that. No, I would complain to the people around me. I would point out the stupid things, the selfish, the ridiculous and the downright absurd. The world would drive me crazy on a daily basis and I would tell anyone who would listen. Mostly my poor wife.

So, it turned out after all this time, I really was a grumpy person. And that troubled me for a while. But then I had one last revelation.

As I sit here and write this now I finally realise that I just don’t care!

So what if I’m a grumpy old man? So what if I complain? I’m glad I see the disappointments in life. It’s that anger that drives me. It’s what allows me to truly appreciate those around me who do care, and to find the things in life that are not a disappointment.

If I thought everything was great then nothing would be special. 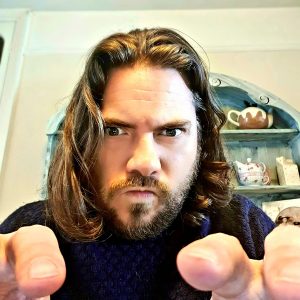